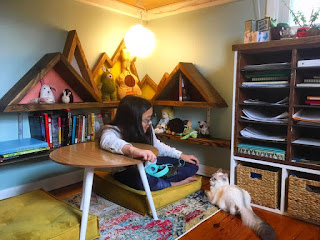 Last summer we moved to the new house. This house is my dream house in so many ways. Nearly every room was an upgrade. For my daughter however, the move was a bit of a downgrade. At our last place she had the entire 2nd floor to herself, including her own gigantic bathroom. At the new house, her room is the smallest and farthest from the bathroom, which she is now forced to share with me. The room has some nice attributes though. It is situated in the back corner of the house, probably the most private room, and it has a lovely view of the mountains and creek from both windows. In the evening she can see the sunset over Grandfather Mountain. But the room is still tiny, especially after we stuffed it full of her old bulky furniture. She's not much of a complainer. Even at 14, she's probably the sweetest, most laid-back human I know. so if anyone deserves a room makeover, it's Sophia. Sophia chose the color palette herself, and I love it. 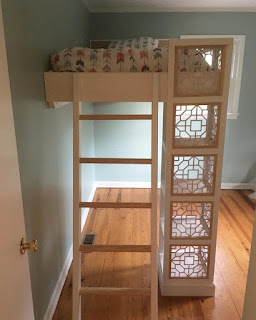 My initial plan was simply to build a loft, and give her a studio space underneath. The loft was fun to build. I found inexpensive decorative ceiling tiles, and incorporated them into the design. Building into the corner allowed me to streamline the bed, forgoing bulky corner posts, without sacrificing stability. 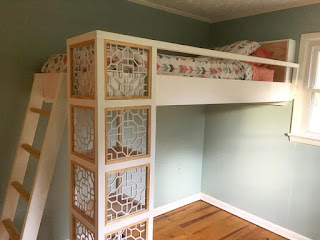 Creating usable space under the loft was a little more challenging. I came up with the idea to build some mountain-themed bookshelves. Then we added a colorful rug, and some large velvet floor cushions, as seen in the first photo. 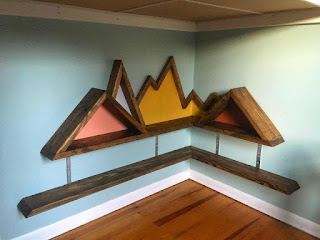 Once the loft and sitting space were finished, I moved on to building a desk into the window. It's a simple design with a farmhouse base. 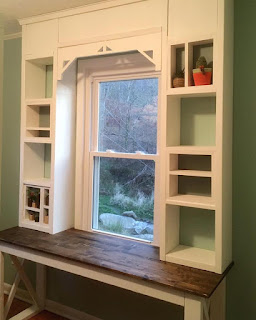 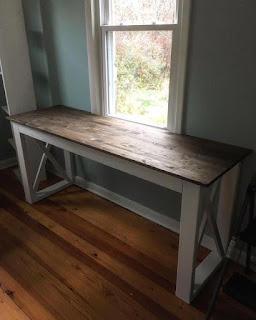 But my favorite part of the new room is the secret compartment that I built into the desk, although I suppose it's not so secret now!

Posted by Katie Boyette at 1:45 PM