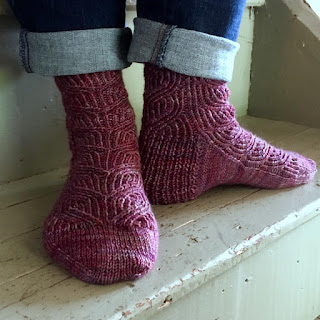 When I first became engaged last summer, I had GRAND notions of the knitting I would incorporate into my wedding. I'm sure a lot of knitting brides do this sort of thing. From shawls to decorations to socks (yes, at one point I unwisely determined I would knit fancy wedding socks to wear with oxfords under my dress), I was going to knit it all! I especially became enamored with the idea of knitting all of my flowers. I thought I would create delicate arrangements of flowers using lace-weight and fingering weight yarn. In practice though, these flowers were tedious, and not at all what I had imagined. I used the few I completed by pinning them into my hair.  What I had left were several skeins of beautiful delicate yarn.  Among those skeins was this Malabrigo sock yarn. 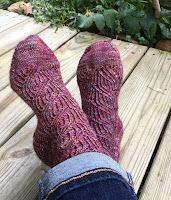 While packing for our honeymoon, I realized I had not adequately planned my knitting projects. Dave and I were headed on a beautiful and epic road trip up the coast of Maine, into New Brunswick, and across to Nova Scotia, where we drove down the entire south shore. 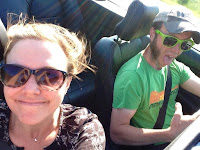 It was magical.  I knew all of that time in the car would mean plenty of time to knit, so at the last second, I grabbed a wad of old magazines of my shelf and a couple of skeins of yarn.

On the plane ride, I browsed old patterns, finely settling on Marlene, a sock pattern from a 2008 issue of Knit 1. I knew my hoarding would pay off one day...

Despite plenty of time to sit and knit while cruising the northern Atlantic in a Mustang convertible (a very smart last minute impulse decision by myself and new husband), I did not make it far into this pattern, which initially required a greater attention span than I had. The landscape was too beautiful to spend staring at my hands. But after a few months of picking them up and down, they are complete! Perfect timing actually, as the weather is just starting to cool, and these are quite cozy. 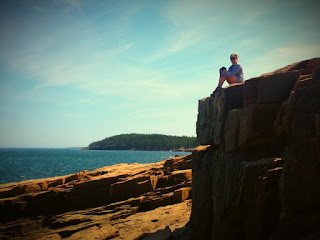 Posted by Katie Boyette at 2:54 PM